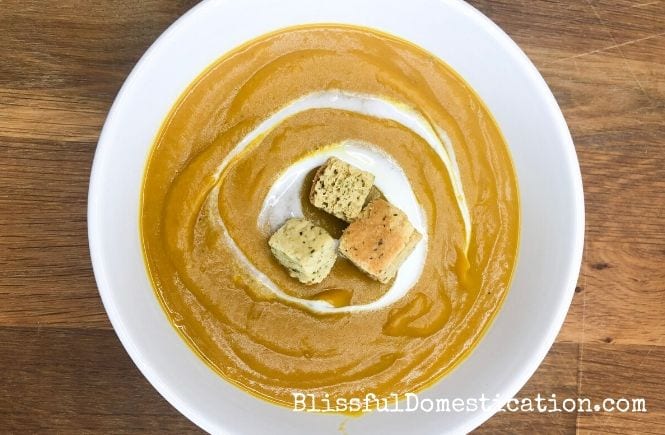 This time of year pumpkins are in abundance! As soon as Halloween is over, they are practically giving them away (some shops actually are!), but pumpkins can be used for so much more than just carving a Jack-o-lantern.  Here is a very simple recipe for Slow Cooker Spicy Pumpkin Soup and a few other ideas of what you can do with pumpkins for low cost yumminess!

I had every intention this year to recycle our Jack-o-lanterns after Halloween.  However due to placing them on a cupboard that housed a warm DVD player, they perished within days! Note to self, place pumpkins in a cool place next time!  If you do want to recycle carved pumpkins in the future, make sure you use a little LED light inside rather than a traditional candle, as candles will char the flesh which affects the flavour.

I picked up these two pumpkins for 50p at my local supermarket.  The larger of the two was turned into Slow Cooker Spicy Pumpkin Soup as the recipe below, and i’m not sure yet what the other will be turned into but I have a few ideas.

The first thing to do before any cooking, is to cut the pumpkin in half and remove the pulp and the seeds.  I urge you not to throw away this part!  I wanted to save our seeds to plant next year for our very own pumpkin patch.  This is easily done and just requires washing the seeds and removing them from the pulp, and drying on a flat tray for a week or so before storing them.

However you can also make some yummy snacks from your pumpkin seeds, by roasting them in the oven with a little oil and some seasoning.

I love making soup, and I love eating it! This is a really thick creamy warming soup, perfect for the transition from autumn to winter.  I tend to cook my soups in a slow cooker, as it means I can cook in large batches, but the recipe can be modified to do on the hob if you wish.

How To Make Your Slow Cooker Spicy Pumpkin Soup

If you don’t fancy this recipe, there are lots of others on-line to try to use up those pumpkins.  Why not try this Pumpkin and Crispy Chorizo Soup or Low calorie Pumpkin and Pesto Soup over at Devon Mama, or try this delicious Pumpkin Spiced Norfolk Scone over at Little Paper Swans!

Whatever you do, just don’t waste those pumpkins!

If you need anymore ideas, why not check out my post 15 Sweet and Savoury Pumpkin Recipes for more inspiration!

NB. I am a home cook, and have had no formal training in preparing food. So these are just recipes that I use at home for the family. Whilst I have taken time to try and be as accurate as possible, some of the quantities are approximate.  I am always keen to learn, so if you think the recipe can be improved upon please take the time to comment below. I also love seeing your versions.

A Healthy Start to the Day? Try a Green Smoothie