I was asked to take part in the Christmas Stocking Blogger Challenge in conjunction with Turtle Mat, and of course I said yes. Christmas and crafting with a competition too! I’m really pleased with our finished stocking, read on to find out how we got on!

I was asked to design and create a Christmas Stocking as part of Turtle Mat’s Christmas blogger challenge.  The box arrived and inside were all the essential items needed to help create the perfect Christmas stocking, including tinsel, a sewing kit, pine cones, glitter glue, decorative robins, string, hessian, and bells.

If i’m honest I thought it would we would be sent a ready made stocking just to decorate, but no! All the materials and equipment were there, but I needed to create the stocking from scratch.  Sewing is not my strongest craft skill by far, but never the less, I dusted off my sewing machine and set to work.

First I used one of our stockings as a template to cut the shapes from the hessian material.  Then I used the sewing machine to sew the two halves together before turning it round the right way.

The girls really wanted to get involved, so I decided that we would make a cute Santa face to decorate our stocking.  I cut some templates from card and the girls set to work cutting out the shapes from the coloured felt.  We used double layers on his hat and beard so we could put a little stuffing into them to give him a more three dimensional look.  The girls loved the sewing, but it did take a long time.  Initially we had set out to create two Santa’s, but it took too long so we had to concentrate on just  the one.  However I was really pleased with how Santa turned out, felt shapes with some googley eyes and a few pom poms to finish him off.

To make our stocking look more interesting I added a band of red and gold fabric around the top which I had lying around the house, which I stitched into place using the sewing machine.  We then used the red mini tinsel as an edging strip which made it look more festive.  As we only had one Santa, we made some red felt stars to decorate the rest of the stocking.  I had initially planned to stitch the felt components to the stocking, but again due to running out of time we ended up gluing them on, but I still think it turned out OK.

The box also had some little bells in it, and I really wanted to incorporate them some where.  So I threaded them onto a piece of thread and stitched them to the end of Santa’s hat. It made the stocking jingle every time it moved which I thought was a nice touch.

Then all that was left to do was  to fill our stocking with some treats! I added a little Robin to the top that came in the box and used the candy canes to poke out from the presents.  All in all I’m really pleased with how our stocking turned out.

What do you think of our finished stocking? Have you and your family been crafting this Christmas?  Would love to hear what you have been up too. 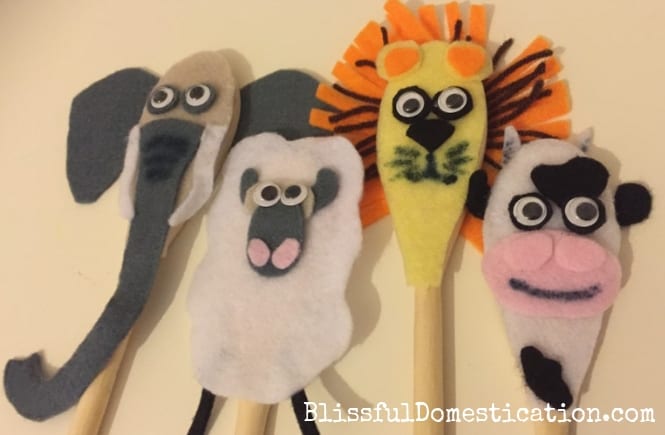 How to Make Wooden Spoon Animals

How to Make a Pipe Cleaner Bee